Dear Readers: It will be a while before I am able to post again. I thank you so much for reading and do look forward to writing again, but have some things to do and cannot blog. All the best, thanks for stopping by.

Ritter is a Wisconsin native who is an architect. He graduated with his bachelor’s and Master’s degrees from the University of Wisconsin. He relocated to Franklin in 2001 and operates Ritter Architecture.

Kimsey has human resources experience and has worked at Caterpillar.

Mashburn is a Franklin native graduated from Southwestern Community College. He is retired.

McRae came to Franklin in 1983 and received her bachelor’s degree in biology from St. Louis University in 1964 and worked for IBM.

FRANKLIN (MACON COUNTY, NC) — Running this year in the Tues., Nov. 5 election for mayor of Franklin are Sissy Pattillo and Bob Scott.

Pattillo former served on the Franklin Board of Alderman, for a seven-year period. Pattillo filed to run on July 5. She is a Franklin High School graduate and attended the University of Greensboro and Western Carolina University.

Scott currently serves on the board. He has served for a decade in office. He moved to Franklin during the late 1960s and attended the Western Carolina University, where he earned a bachelor’s degree in criminal justice. 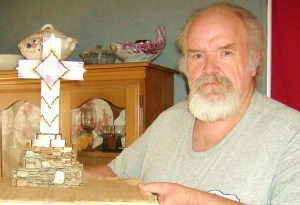 David Martin lives in East Franklin and has been doing matchstick art for 20 years.

David Martin lives in East Franklin has been creating art from matchsticks and matchboxes for 20 years. During that time, the Franklin resident has created hundreds, if not thousands, of crosses out of these, reflecting his strong Christian beliefs. When not working on his craft, Mr. Martin is a local mason who works in construction.

IN THE SMOKIES COMMENTARY

I am a Northerner, a Yankee, a city boy…however you want to say it. Being from New Jersey, and being born in arguably the ugliest city in the country, Newark, and educated in Manhattan, New York, the perils of urban life never really struck me as strange: crime, over-population, corrupt officials, the drug culture, the booze culture, the cultural anything or the diversity. I have yet to encounter anything in a major city in this country that strikes me as odd or even unique, and I have spent time in most of the big cities in the USA. With that said, I want to talk about one thing, in particular, that has always, always bothered me about the state of Florida — alligators.

I was reading the Asheville Citizen-Times today and there was one story that caught my eye: “Jacksonville police kill gator after it ate dog.” Well, before I was done reading the headline I was glad I was living in the Smoky Mountains of North Carolina now, because I dare you to find an alligator about 500-feet elevation in North Carolina.

Like many New Jerseyans, I was briefly a Florida resident. It seems so many people from the Garden State, at one time or another, go to FLorida to see if it is for them. Well, I tried it out in Tampa, and even moved right next to the medical center they have there, which is down the street from the former Legends Field, now Steinbrenner Field, the Yankees’ Florida facility and in direct eyesight of the Buccaneers’ football stadium. So I was in what I thought was a good spot. But, behind my apartment there was a small creek and two signs, which I took as cute jokes for the kids in the development: “Please fon’t feed the gators” and “This is a non-picnic area, beware gators.” Some apartment living levity, I thought.

Then one night, on a walk around my complex after dinner, there they were at the base of the creek, right next to the cute signs: two alligators, which were about 50 feet from my front door. I ran to my apartment, hurried to the phone and called the now-closed apartment office, inquiring impolitely about why there were alligators next to my apartment. After my message was done I called the police department and asked if they could have someone come over and catch or shoot these alligators. In response, the police operator asked, “Are they bothering you?” I responded, ‘No, they are not currently trying to eat me, but in the larger sense they bother me because they might.’ The police operator concluded the call by saying, “Well, sir, if the alligators do start attacking you — then it is time to call the police.”

Ask the dog in Jacksonville that just got eaten how much time he would have had to call the police, if, of course he had opposable thumbs or could talk. But, the answer is not long.

I know there are weight issues of the world in the news, from economics to wars in Southwestern Asia to the crushing immigration problem confronting our nation. But, I just want to say I am grateful to be living someplace where the only sign of alligators are on boots, hat accessories and belts.

In the United States, our government is famous for waging wars against big problems that are hard to solve: The War on Drugs, the War on Illiteracy, and the War on Cancer. Here’s an idea for a war on something we can actually solve: The War on Gators. In my book, alligators now and for evermore either belong in remote, unpopulated areas, in zoos or existing in the form of apparel somewhere.

I suppose this is my first attempt at a comedic ‘rant’ here and I hope it made someone smile along the way.

IN THE SMOKIES BRIEF

Paranormal expert Joshua Warren uploaded this piece about the haunted “Old Jail” in Asheville, North Carolina. Located across from the Asheville Court House, the Old Jail is in the heart of the city.

I do not know if Bryson City, NC held their Independence Day fireworks on July 4th, given that it was pretty rainy and wet around here, but this video was posted on July 6th, so there was only an extra day in there. Anyway, it is a great video of fireworks and I’m always in the mood to see an Independence Day show.

FRANKLIN (MACON COUNTY, NORTH CAROLINA) — When someone south of Maryland says they make the best BBQ there is — those are fighting words that need to get backed up.

Well, there is no better opportunity to find out who makes the best BBQ than by entering or attending the Mountain High BBQ Festival & Car Show, taking place at the Wayne Profitt Adricultural Center, 1436 Georgia Road. The event will take place over two days: Friday, Aug. 9, 11 a.m. to 8 p.m.; and Saturday, Aug. 10, 10 a.m. to 6 p.m.

Topics of the Day

faith.writer@live.com
Please use e-mail to send in releases
Inthesmokies is published daily.

IN THE SMOKIES
Blog at WordPress.com.